A Little Bit Of History

Described on Wikipedia as “a large Victorian corner pub”, parts of the building date back to the 16th century and has been a licensed premises since the 1700s.

“The Norfolk Chronicle of 10.02.1906 records that licensee Albert Coe (Cole ?) applied for lifting of a restriction on females entering a room where music, singing and dancing took place. The house was frequented by soldiers. Before the restriction soldiers had accompanied young women, but not by girls of 16 years old or younger, to the concert room. The police reported that they had suffered much trouble before the restriction but not after.
The restriction was not lifted.

The Freehouse pub was apparently named after the lion insignia part of the arms of Norwich, which depict the royal lion of England and Norwich Castle. It sits on the River Wensum, next to Bishop Bridge, one of the oldest active bridges in England. Allegedly, Queen Elizabeth I crossed it when visiting Norwich in 1578.

The Red Lion is owned by the Great Hospital Charity, and reopened in May 2021 after complete refurbishment. It is operated by Nick & Briony De’Ath, who run several other popular pubs in Norwich: The Unthank Arms, The Trafford Arms, Chambers Cocktail Company and the William & Florence. 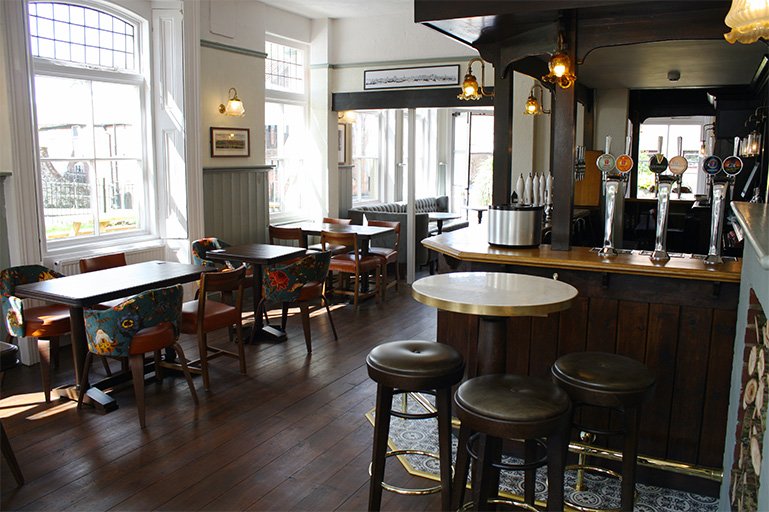 At The Red Lion Bishopgate

From Weekend Brunch, all week lunch and dinner to Sunday Lunch. A regularly changing menu to suit all tastes and appetites.

A Great Range Of Drinks

We’re a Freehouse, so you’ll find we have a fantastic range of draught beers and ales, as well as gins, soft drinks, whiskeys… or simply a good coffee.

In the shadow of Norwich Cathedral, right on the river, The Red Lion is the perfect edge-of-the-city-centre destination to relax and refuel.

Make a booking at The Red Lion, Bishopgate